Maine's largest city, Portland is known for its stately elms, historic homes and restored waterfront area. Considered the gateway to "Down East" Maine, this coastal city is a great spot to enjoy Maine lobster fresh from the sea. Visit Longfellow's boyhood home or explore Portland Headlight, the oldest lighthouse in constant use today. Nearby is Freeport, home of a large selection of discount and outlet stores.

Drawn by the pines, granite shores, fresh lobster and stunning views from Cadillac Mountain, captains of industry once kept summer homes here. The charming little town, and all the rest, remain. And the rocky boulder beaches on its shoreline are now Acadia National Park, a preserved expanse of vintage Down East scenery.

The Bangor Region is located between the rugged coastline of Downeast Maine and the spectacular North Woods of Maine. As the economic and retail hub of Eastern and Central Maine, Bangor boasts a significant retail industry which attracts travelers from throughout Maine and Canada. With a population of just under 35,000 in the city of Bangor, this community offers the benefits of a growing city, while enjoying small town charm and peace of mind.

Camden is located within a beautiful sheltered bay in Maine. Residents and visitors enjoy sailing, hiking along the extensive trail network, cozy picnics, and bird watching. Shopping in Camden is a virtual cornucopia with everything from handmade furniture, to whimsical sculptures, and unique gifts. There are several world-class restaurants, but with fresh seafood available even budget-minded travellers with enjoy unsurpassed local lobster and seafood chowders.

Rolling hills and a deep blue marina paint Rockland as a picturesque harbor town. Known for its lobster and as a foodie haven, Rockland hosts the Maine Lobster Festival every August. Visit art galleries and shop at quaint antique shops and boutiques, or spend an afternoon with renown American artworks by the likes of Thomas Eakins, Eastman Johnson, Fitz Hugh Lane and Gilbert Stuart at the Farnsworth Art Museum. The museum also features the country's second largest collection of Louise Nevelson's sculptures and a special exhibition of the Wyeth family's works at the Wyeth Center. The Breakwater Lighthouse in Rockland is scenic, perched on the end of a long stone walkway. From Rockland, vist Thomaston, or to the Peneobscot Bay peninsula for spectacular views where you can also experience the Owl's Head Transportation Museum and the famous Owl's Head Lighthouse, from 1825. Port Clyde further afield features the Marshall Point Lighthouse and a museum made from the 1895 chambers of the light house owner.

Boothbay Harbor, a 17th-century English settlement in southern Maine lies on a peninsula of the Atlantic coast between two rivers, 59 miles northeast of Portland. It is now a resort and fishing area. Places of interest include the railway and historical-society museums and the Sherman Zwicker, a Grand Banks fishing schooner, also preserved as a museum.

Bath, ME
9/2/2022
9/2/2022
Best known for it's tradition of shipbuilding, Bath is also a busy port of entry.  Many tourists visit the city to admire the well-preserved 19th century architecture or take a tour of the Maine Maritime Museum.  Bath is also home to one of the largest American shipyards, Bath Iron Works, where many military as well as commercial vessels have been manufactured.
Portland, ME
9/3/2022
9/3/2022

Maine's largest city, Portland is known for its stately elms, historic homes and restored waterfront area. Considered the gateway to "Down East" Maine, this coastal city is a great spot to enjoy Maine lobster fresh from the sea. Visit Longfellow's boyhood home or explore Portland Headlight, the oldest lighthouse in constant use today. Nearby is Freeport, home of a large selection of discount and outlet stores. 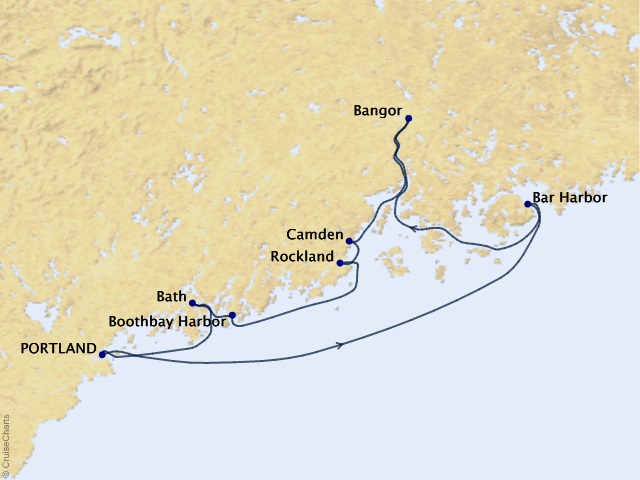 Itinerary subject to change without notice. Please confirm itinerary at time of booking.

Departure Date:
8/27/2022
Number of Nights
7
Cruise Inclusions:
Remarks:
Prices are per person based on double occupancy. Pricing on some sailings may reflect special limited time offers, not combinable with any other offers/discounts. Valid on new bookings only.

All fares are quoted in US Dollars.

All prices per person and in USD unless otherwise stated.
Offer ID:
1390737

Reference this number when contacting our agency so we may better serve you. Also keeping this number handy will allow you to locate this document again quickly.

Information and pricing is subject to change without notice. While we do our very best to ensure that information and pricing appearing in this website is complete and accurate, we cannot be responsible for incomplete and inaccurate representations, which may or may not be under our control. In the event of a pricing error, misrepresentation or omission, we reserve the right to adjust the pricing or make any other corrections.